Another day, another beautiful sight to behold!  On our second solo day in Paris, Grace and I channeled a little Quasimodo and headed towards the Notre Dame bell tower.  We were determined to go up!

The line was long, even earlier in the day, so we had time to relax and take in some people watching….and were treated to this sight…

And of course, our sights kept going up the tower.  It was pretty high and Grace was nervous 🙂

The walk up the steps was a bit harrowing.  It was narrow and circular and caused a small amount of stress on my slightly claustrophobic child.  But she did well and we were rewarded at the top with lovely views of Paris!

From the top we caught sight of the Pont des Arts and decided that was our next destination.  We’ve seen the love lock bridge in many romantic movies and were excited to explore all the love left there.  We didn’t participate in the ritual because we had read that the city was having problems with the weight on the bridges due to all the metal and were exploring options to either repair or reduce the effects.  We simply walked the bridge and enjoyed the ambiance while imagining the stories behind those little bits of romance 🙂 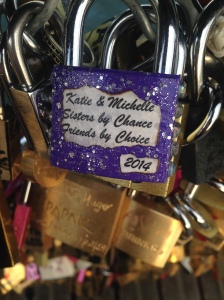 We knew that our time was quickly winding down in Paris and there were a few key items I wanted to at least set my feet in.  One of them was the Louvre.  I couldn’t go to Paris and not see my girl Mona!

I could have spent a year in this museum.  It was simply spectacular.  We only had about an hour and it was such a shame to leave.  This museum alone is reason enough to come to Paris! 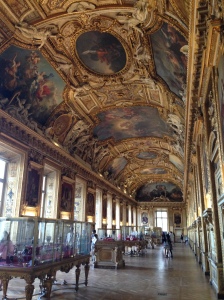 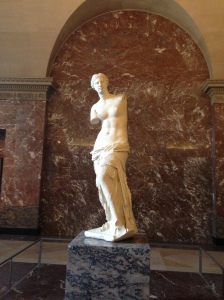 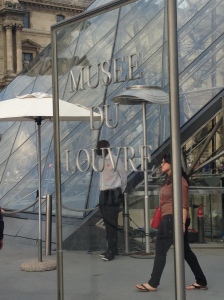 As you can see, night was falling and we knew it was a hike back to the Tower, but tonight we were going to walk it!  But first, a snack… 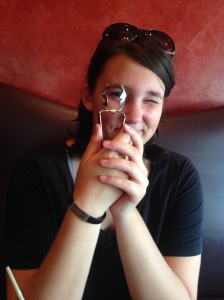 Yes they were that good!  Don’t knock it until you try it!

We made it over to the tower and were getting pretty excited to head up!  The line for the option to walk the steps to the second floor was pretty small….I guess it was too hot for most people!

We finally made it.  669 stairs to the second floor.  All I can say is WHEW!  What a workout!  But the views….oh they were so worth it!

Ah, Paris.  We shall miss you.