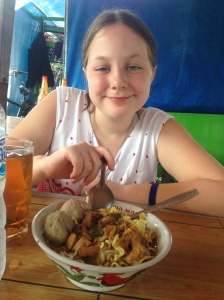 After leaving Batu Karas we decided to stay in Yogyakarta for a few days to search for some Batik paintings and visit the Sultans Palace.  There were also a few other temples we wanted to see, however, that will be for another time.  This post is more about how we ended up where we ended up and how I feel like we finally had an experience that we’ve only read about!!

One of the biggest reasons I wanted to stay in Yogyakarta was to search for Batik paintings.  It’s supposed to be the mecca of all things Batik.  However, I also read that it is a city full of crooked and dishonest Batik sellers.  I believe, after having experienced what we did, that the Batik sellers have their scheme so far down pat that it would take someone homegrown to recognize it for what it was.

To begin our crazy day, we started at the Sultans Palace taking a private guided tour by the music instructor at the palace.  He seemed very nice, but who wouldn’t when your payment depends on your personality!?  However, I’ve long since realized that taking tours with a guide is much better than just wandering around some place with NO idea what you are looking at.  It was nice to have some of the things we looked at explained to us.  For example, there are many pillars like this all over the palace grounds: 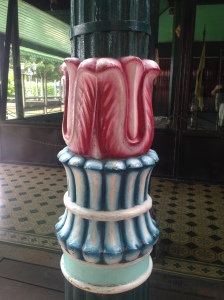 They are used to signify the melding of three religions.  The green on the bottom signifies Muslim, the middle blue signifies Hindu and the top lotus signifies the Buddhist.  I do however find it amusing he felt the need to reinforce that Indonesian Muslims are not like the Muslims from the Middle East.  He wanted me to know that because of the Buddhist influence they are a kind and gentle Muslim.  He then proceeded to give a big hurrah to Obama.  On a side note, we ran into that a LOT there.   Obama’s mother married an Indonesian man and they lived in Yogyakarta for about 6 years, so they feel a great affinity for the current US President.  Anyway, we toured the grounds and he showed us the music building.  If you look close there are chickens in cages in front of the building.  They are placed in front of every building to ward off bad spirits. 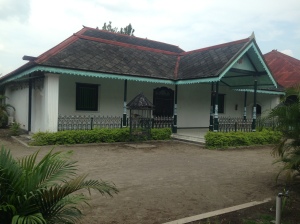 We also saw the great coronation hall where the last coronation took place in 1989.  A new sultan is only made sultan upon the death of the last one.  Talk about a lifetime of work! 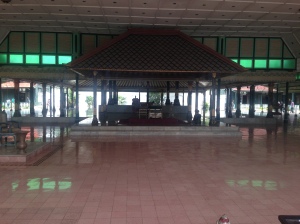 So here is where it gets interesting.  I had heard that there was a ‘school’ for Batik painting near the palace and our guide offered to show us where it was after our tour was over.  Upon arrival, we were shown how Batik was made and it was explained that there were students that learned there and then put their pieces up for sale. (batik is done by outlining the painting in special wax and then allowing the cloth to absorb the color to create the design.  then the cloth is washed to remove the wax.  the paintings can then be washed and ironed, used as art or cloth)  The more expensive ones were made by masters and the least by the novices.  It seemed straightforward even though the sales person was hovering and talking about how his father was a master and a very well known artist.  And of course how the pictures we were leaning towards were done either by him or his father.  After about an hour of looking we had narrowed our choices down to about 5 paintings and ended up taking them all.  The total price for our ‘original-one-of-a-kind’ batik paintings was about $300 USD.  Here is the one Grace picked out. 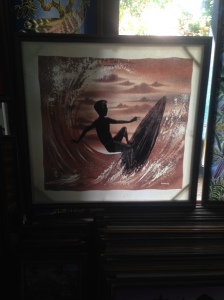 We all found one we liked and then we bought another one that all of us liked.  I’m still happy with our purchases even after what ensued.

Once done with our purchasing, we headed out to take a tour of Taman Sari ~the water castle.  It has underground tunnels that were used as secret passageways by the Sultan.  There are also pools that were once used as a way to show the Sultan the women that were being offered to become part of his harem. 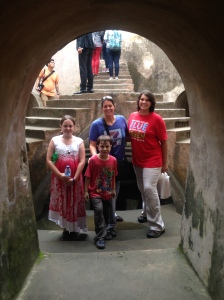 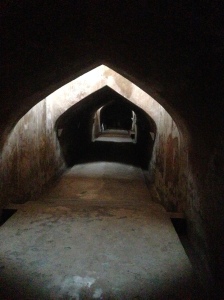 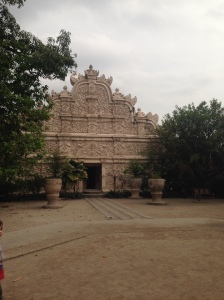 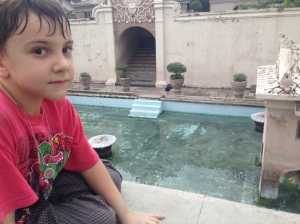 This by the way, this crazy boy child of mine, decided to walk along the top wall and then jump across the corner to another wall scaring the crap out of me.  The drop along the back of the wall ends in concrete.  My heart still leaps thinking about it!

So the guy who was walking around with us started talking about Batik painting and asked us to come see the ones in his shop because he believed the ones we bought were fakes.  He suggested that the artist whose name was on ours altered the paintings, which he bought from the original artist, to reflect a different signature and sold them off as his own original works.  He actually showed me another painting, very similar to one I purchased, that had another artists signature on it, insisting that this was the original artist.  It was also significantly cheaper that the one I had purchased.  At this point, after spending so much money and feeling like I’d been had, I bought that look alike painting and headed back to the original shop.  I was on a mission to get either a return or at least a partial refund.  You would think at this point I would have realized the ENTIRE thing was part of a city wide scam.  The guy, the ‘friend’, the one who enlightened us as to the authenticity of our paintings?  yeah…he asked for a tip for his guide services.  It’s so seamless here you don’t even realize you’re getting taken.  And just so you know at this point I had already figured out we were knee deep in the hoopla!

Of course you can probably guess where this went.  Absolutely nowhere.  The manager I spoke to said he was allowed to give no refunds.  I told him that this entire business was shady and I wanted nothing to do with it.  He said his work and the work of the artists was original and if I was willing to bring that other man to the store he’d then return my money.  Huh?  Didn’t he just say he wasn’t allowed to do that?  Also, when I was purchasing, they told me they would be closed the next day because of some show or some such in another part of town….but this manager said I should bring the lying man back the next day…..but weren’t you going to be closed?  I outright called this man and his employee liars.  This whole scenario was a great big fabrication to gain the money of people who know nothing about Batik painting.  Man he jumped on my ignorance of Batik too….I told him this wasn’t about art, it was about integrity and honesty while running a business, which he had none of.  I also told him that if he wouldn’t give me at least a partial refund I would file a report with the tourist commission about the shady business dealings with his ‘school’.  He laughed.

So I walked myself and my three kiddos to the police station where they listened to what I had to say and then, after chatting so I couldn’t understand, escorted me back to the shop in the hope that their presence would force us to find a compromise.  Ultimately I ended up meeting the artist and after chatting with him felt a bit more comfortable about the authenticity of the pieces we bought.  I was still very disappointed in regards to the business end and they gave me a 25% refund. (this was after he offered to give me a few pieces of free art….in hindsight I should have taken that and given them out at Christmas!)  From what I gathered from the police, there is a lot of lying going on in regards to tourism here.  Lots of he said she said and it’s all done in the hopes that they will sway the tourists pocketbook in their direction.  I left with an ugly feeling about that whole day.  However, here is a picture of the police escort I had! 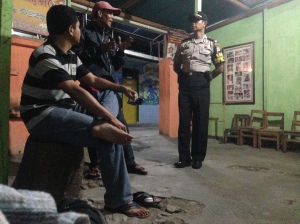 And you know something?  As we were leaving, the owner/artist slipped the police money on the way out.  Just padding the pockets of those that serve and protect.

That experience really turned me off to Yogyakarta.  I’m sure it’s a lovely city, but we did no more in the city sightseeing after that.  It just goes to show that crooks will be crooks and you can’t always believe people to be as honest as you are.

In the end, we chose to not allow the experience to color our views of our paintings.  They are real Batik paintings done by artists  in Indonesia.  We love them.  And when we get a home I’ll frame and hang them.

After all, it’s all about the story right? 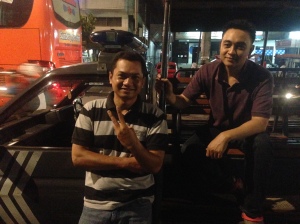