Our first week on the Big Island is coming to a close…I can’t believe how fast it’s flown by!  We had some big events and some beautiful scenery.  When we got here on Monday the time change had us here by noon even though it was 3 pacific time.  We got off the plane in the coolest airport ever!  You exited the plane down some steps outside and then walked over to the open airport.  Kona’s airport isn’t very big so it was easy to navigate.  We picked up our bags (they were easy cause we were the last ones off the plane!  Annalea got to have a seat in the captains chair!) and hopped on the shuttle to the rental car place! 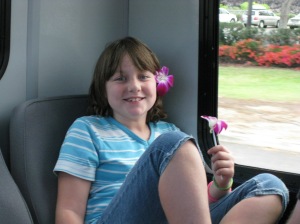 After we picked up our rental car (upgraded to a 4 wheel drive….thanks honey!) we were off on our two hour drive across the island to our first rental house.  It was a lovely drive.  Although in the words of an 8 year old, not exactly what we thought it was going to look like!  The middle of the island is a big volcano wasteland.  Not a whole bunch of green….but then, as you are looking out the window, it dawns on you that the lush tropical vegetation is abundant.

From what we learned, the east side of the island is the wet side…and it shows with the rainforest type landscape and the zillion mosquitoes!  It was about four when we arrived at the Jungle Hangout.  We had to stop and grab something to eat.  And of course the grocery store for breakfast items 🙂

The Jungle Hangout has turned out to be a really great place for our home base on this side of the island.  It’s very secluded and yet pretty close to town.  It’s only about 20 minutes south of Hilo (the big town on the east side) and the nearest grocery is about 8 minutes away.  The house itself is in a rainforest setting with lots of coconut trees outside as well as banana, passion fruit and avocado!  And of course it has all the amenities like laundry, towels, beach items, full kitchen etc.  The only things that we’ve had to buy are personal items.

The second day we were here was my birthday 🙂  What a great place to spend it in right?!  We all woke up pretty early.  It was about six but it was nine pacific time.  We had some cereal and then headed out.  The first stop was to find some coffee!!  Grace and I wanted some local stuff so Carl took us over to the Hilo Coffee Mill. It was a great experience.  Grace and I took a small tour and learned how coffee was made and processed and got to taste a few different varieties of coffee.  We also learned that since the Hilo side of the island gets a lot of rain, the coffee produced here is much less acidic than the Kona coffee most people think of when they think of island coffee.  We really enjoyed it as well as the ono grinds they had to sample and purchase in their store.  Everything they have they get from local farmers and man oh man was it all yummy.  The macadamia nuts were covered in a variety of flavors…chocolate and wasabi, chocolate coffee beans, and some delicious coconut candy (that I’m going to try to make later today!). 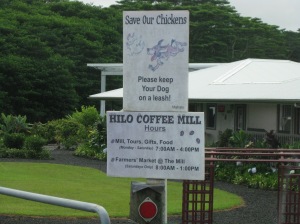 After that we decided to just get our shopping done, check out the market, and then head home to chill out and get to bed early.  We were all pretty tired still and thought it would be better to not push it the first day.  We decided to have some lunch out and settled on a local joint called Cafe 100. It’s a locals walk up joint where you can score a yummy meal called a Loco.  Basically it’s rice covered with any number of options….the one we settled on was the well known Moco Loco.  It’s rice covered with a hamburger patty and some brown gravy and then topped with an egg.  You wouldn’t think anything of it until you take a bite.  Seriously good.  We also got a Super Loco which was the rice covered with chili, beans, spam and sausage.  Yes.  I said Spam.  You wanna know something?  We LOVE Spam….we make Spammiches a lot.  I’m not ashamed….I bet you secretly like Spam too. 🙂

The market in Hilo is open every day of the week rain or shine.  And it rains frequently here!!  The first trip there was awesome and we scored some fruit we’ve never tried before.  Some we loved, like the apple flavored bananas, and other’s we weren’t impressed with.  There was a bit of a language barrier so we weren’t clear on the names of some of them….but one that was called a ChoCho was a squash type of vegetable that was really good fried.  And we also picked up some breadfruit (which I haven’t cooked yet).

We had fried ChoCho’s and spaghetti for my birthday dinner.  And the kids, with help from Daddy, made me a brownie cake thing with homemade icing.  It was quite the yummy dessert!  Our first full day in Hawaii was pretty Awesome.  We all were fast asleep by 9 pm though….and that made for a get up early and get moving kinda day on Wednesday!  But….we’re getting ready to head to the farmers market and get some coffee…so I’ll tell you all more on the next post!