So if you follow me on facebook you already know that we spent a week in Langkawi, Malaysia.  We had to head out of Thailand so that we could activate our next visa coming back into the country.  The island was an amazing choice and I’m so glad that we chose to go there.  I’ll post pictures soon, but I’d like to share the Travelling Awesomes very first guesthouse experience!  In Thailand a guesthouse is a cheaper form of nightly rental that typically is very sparse with shared bathrooms and shared common rooms.  It’s where you are likely to find the 20 something backpacking crowd.  We left Phuket at 10 am and it was an 8 hour bus ride down to Satun.  It was long, but we managed!

I figured for our overnight in Satun, Thailand (before getting on the ferry to head over to the island) we would just stay at one that I found online.  There were two that I wanted to see so we chose to stay in one on our way out and one on our way back.  The first one was called Ang Yee’s Guesthouse.  When I called to make sure they had a room, Cheer was very helpful and said we could have a room with an extra mattress for the floor.  The reviews were good and he sounded cool so it was a go!  When the bus (an 8 hour ride from Phuket) dropped us off, Cheer came and found us and drove us back to the guesthouse.

It was pretty empty when we got there.  But it was 7 pm and we were hungry so we headed up to our room to shower and see about getting some dinner.  The room was clean and big and it shared a set of bathrooms with two other rooms on the same floor.  However that night something was wrong with the running water so we had to take a bucket bath!  That was fun, the water was cool, but we got all the travel grime off which was the important part!  Then I headed downstairs to find out where we could get some dinner and was happy to find that there was a local pizza guy that would deliver!  The kids and I devoured three pizzas and decided to hit the hay.  We had a long day and were ready to get some shut eye.  However, let’s just say that the mattress wasn’t heaven sent.  We ended up napping on and off around the springs 😦  I have to say that the mattress was really the only negative thing.  I didn’t mind the scoop shower method and the atmosphere was vibrantly hippy with a lot of arts and crafts to check out.  There were a lot of places to sit down in the common area and we really enjoyed hanging out the next morning and chatting with Cheer and some bicycling tourists from South America.  Cheer used to be an accomplished rock climber and gave us some tips for when we came to Krabi. 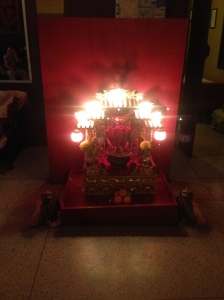 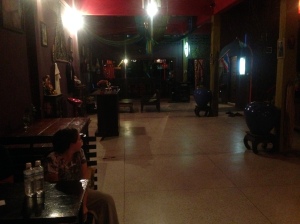 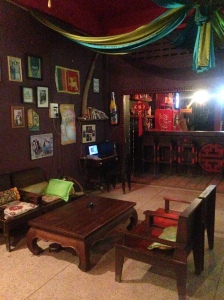 When it was time for us to go Cheer took us to the pier and took us inside to the office we needed to be in to process out of Thailand.

All in all I would say that our first experience in a guesthouse was great.  And if they would replace that mattress, it would definitely be a place worth writing home about!!