Wow…I can’t believe it’s taken me so long to post the final Hawaii pictures.  Finishing up vacation and then coming home and recovering from it took a lot out of me (and the rest of ’em).  Now I know why people come home from vacation just to say they need another one!  Well, to save the current stuff for later, I’ll just go ahead and jump into the pictures of the last few days in Hawaii. I want to get you all caught up before sharing the new stuff…I’m a bit of a linear thinker 🙂

We spent our final week in Hawaii on the Kona side.  We already knew that it was the more touristy side of the island but were looking forward to spending time there and taking in the sights.  I have to preface this with a note that there WILL be another post of Hawaii pictures because I haven’t uploaded the ones from the kids camera’s yet and I’m SURE there will be a few postable photos on there somewhere!

Ok, I’ve told you all before that I loved the markets over there.  Here is one of the reasons…this little girl is a budding entrepreneur who decided to make some magnets to sell at the market….I wrote her name down on some piece of paper that I no longer have and it bugs me that I can’t remember her name….so if you are reading this, please leave a comment with your name in it!!  I loved buying one of our souvenirs from this young lady 🙂

Here are a few snaps of the gorgeous sunsets at the beach.  There is no way that I could possibly do the view any justice with these pictures…but I hope you get the general idea of how stunning they were.

One of the fun things for us grown ups is that the kids got to play in the surf until we were done watching the sun set.  The water was warm all the time and it was nice to let them just wear themselves out chasing waves 🙂 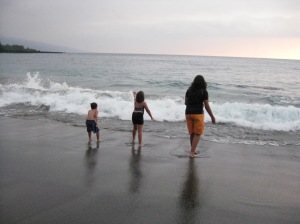 On one of our beach days, we followed the directions in our guide book, Hawaii The Big Island Revealed, to this beautiful out of the way beach.  This is usually a locals beach because of the trek to get there. It’s a twenty minute hike through some not so easy paths ranging from lava rock to rain forest.  But it was SO worth it to see this almost deserted palm tree beach.  I think it was a postcard come to life!

I had read on many websites and in a few books that on a good day you can see other islands from the coast….well, on one of our drives to the northern part of the island, we realized that it was true!  Here is a picture of a pretty decent view of Maui.

Here is another snap of a fun beach we went to.  This one was actually at a hotel (a pretty ritzy one).  It’s nice that the hotel keeps this beach open to the general public.  The only down side was that Sylar got his first bee sting…it was rough and it hurt, but he toughed it out and came out on top 🙂

Of course you can’t go to Hawaii and not go to a luau.  So of course we did!  We got into our spiffy clothes, which really means just anything that’s not workout gear, and headed to a bonafide pig roast.  The kids got front row seats to the imu ceremony and then we chowed down on some yummy food which was followed by hula dancing and a fire show!

Sitting picnic style at the luau encouraged us to meet our table mates.  This lovely couple were newlyweds and just some really kind and friendly folks.  Their love affair began in New York where she is a nurse and he is just about to complete medical school.  There were very sweet and even helped with the kids….I pray for a lifetime of love and happiness for these two!  If you guys happen to be reading this please leave a comment…we’d love to pick your brain about Bora Bora!! 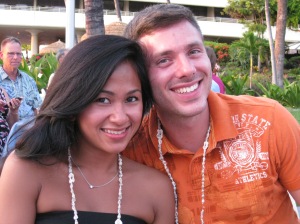 One of the main reasons we settled on going to the big island is so that we could see the volcano.  One of the must not miss hikes, if you’re into that kinda thing, is the hike through the Kilauea Crater.  It was advertised to be a fairly simple three mile hike through various landscapes.  It was something that I’m glad we didn’t miss.

Another neat point we read was that Mark Twain was very fond of the island and it’s rumored that he planted a tree there.  This is supposedly an offshoot of his tree! 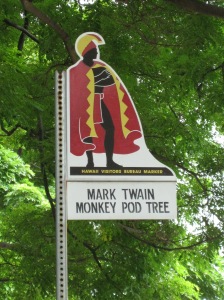 On the big island of Hawaii is also the southern most point in the US.  I’m sure some of you are thinking that the southern most point is in Florida…but that’s in the continental US…this is the true southern most point that we are standing on here by the wall.  The current at the point was fierce.  From what I understand there is a meeting point at the tip where the rip current runs all the way to Antarctica.  History books said that original settlers would fish these waters but if a boat was lost they never went looking for survivors because the current was that fierce.  By the rock wall on the ocean you can see where they tethered their boats to anchors in wall so they could fish from the bountiful waters and be sure to not be taken by the current.

We stopped and had lunch at the southern most restaurant too! 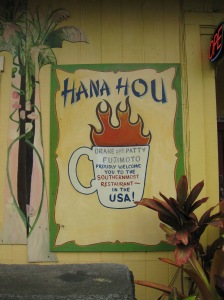 We took a lot of scenic drives on the island….along the way we saw quite a few burial grounds….I was always struck by the simple beauty of them.

And last but not least, here is a pic of a signpost we saw on one of our drives!

Hawaii really was one of the most beautiful and magical places we have been to and I am so very glad that we were given the opportunity to see this wonderful place.  Those of you that told me we would love it were right on the money.  And those of you that expressed a hope to someday go….I highly suggest you make it a priority.  If I had to do it again with what I know now, I would definitely stay longer on the Hilo side of the island…but that’s just me.  We prefer to stay away from the more touristy sights and stick to the local magic. Don’t get me wrong…if you like that sorta thing you’ll love the Kona side…there are tons of hotels and resorts and golf courses that give you their own kind of magic.  And not to mention the surfing opportunities!!  YES!  Grace and I took surf lessons…however, those pics are on another camera and as soon as I put them on the computer I’ll post about that experience….needless to say it was AWESOME!

As I told you all before, I’m sure that as I come across new photos I will share more with you, but for now, I am done….even though I’m certain you are still wondering about the Donkey Balls 🙂  You should just order some…you can’t go wrong!

I just wish I had some more of that Hilo coffee! (which I’ll be ordering soon!)